Hydrogen fueling of vehicles originated many years ago with the first recorded hydrogen car in 1807 [1]. More recently, hydrogen has become increasingly popular as a fuel for cars and buses and has expanded to ships, trains, and aircraft. In fact, as of September 2022, over 50 hydrogen stations and 14,000 cars were in the public in California. Today, much of the hydrogen fueling in cars occurs at traditional gasoline and diesel stations. All the public stations today dispense gaseous hydrogen (GH2), however, stations with liquid hydrogen (LH2) storage are emerging due to larger demand.

This best practice covers the safety aspects of GH2 and LH2 supply systems, dispensing, and delivery of gaseous hydrogen to vehicles at 350 barg (35 MPa, 5076.3 psig) to 700 barg (70 MPa, 10152.6 psig). Many other H2Tools best practices are referenced within. LH2 dispensing is not in the scope of this best practice.

Gaseous fueling stations consist of storage containers that are supplied by hydrogen produced on-site, delivered via tube trailers, and/or received from pipelines. This low-pressure gaseous hydrogen is compressed and stored at pressures above the maximum vehicle pressure (either 350 or 700 barg). When a vehicle arrives to be filled, the high-pressure gas cascade or compressor fills the hydrogen into the vehicle through a dispenser. To increase the fill rate, a chiller is typically used to pre-chill the high-pressure gas before it is dispensed into the vehicle.

At a station with LH2 storage, the cryogenic liquid is stored in an insulated tank at -423 °F/-253 °C. From here, two options exist: 1) the low-pressure liquid is converted to gas in a vaporizer and subsequently compressed, or 2) a cryogenic pump is used to increase the liquid pressure before converting the liquid to gas through a vaporizer. Either way, the end-product is the same: high-pressure gaseous hydrogen is dispensed to the vehicle pressure. The vehicle dispensing process is the same regardless of the station type.

The hazards of GH2 include fire, explosion, and asphyxiation. Hydrogen flames are invisible and odorless. Additional LH2 hazards exist due to its extremely low temperature (-423 °F/-253 °C). The safety hazards that must be managed for LH2 include cryogenic burns, oxygen-rich liquid air forming 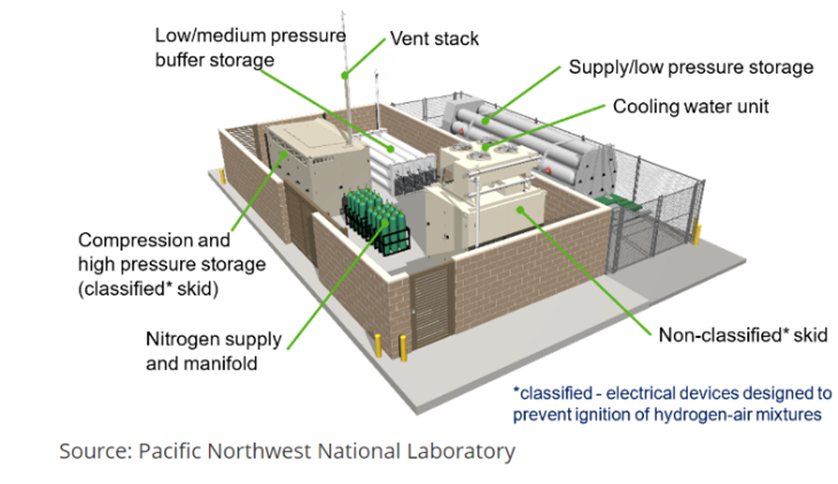 The methods employed at hydrogen stations to mitigate these hazards are:

1. Mechanical integrity is the primary and most important method to prevent hydrogen releases. This is accomplished by selecting compatible materials and components, using joining methods that reduce leaks (welded is preferred), supporting piping and relief devices for reaction forces, pressure testing, and regular maintenance of equipment, such as leak checks and hose inspection and replacements. Pressure relief devices on the storage system and for the station piping should be used. The system should be designed for expansion/contraction. Thermal expansion differences, if not accounted for, will cause equipment failures. For this reason, vacuum jacketing piping, expansion joints, and extended bonnet valving are all found at LH2 stations. Thermal expansion around chillers for GH2 systems can also cause failures.

Codes and standards dictate specific requirements for components to maintain their mechanical integrity. For example, dispenser hoses must include a hose breakaway, which isolates the dispensing system from the vehicle in the case of a vehicle pull away.

2. Safe installation location incorporates safety setback distances (possibly with fire barrier walls) to minimize the impact of a release on people and property. Locating a system in a busy fueling station is challenging and requires not only reviewing the surroundings but understanding the gasoline storage tank locations and interactions with the delivery tanker. Hydrogen stations must be protected from impact damage caused by delivery tankers or other vehicles. The fill connection and trailer location should be considered as part of the safety analysis. As hydrogen is buoyant, a canopy designed for weather protection should not capture hydrogen but allow it to disperse and rise to a safe location.

At LH2 stations, liquid transfers and uninsulated liquid piping should never be located over asphalt surfaces. Oxygen-rich liquid air will form on uninsulated piping and create a severe fire risk when in contact with flammable oil-based asphalt.

3. Ventilation is a key safety requirement for any hydrogen application. At outdoor fueling stations, passive ventilation from ambient air naturally dilutes small hydrogen leaks. Walls, barrier protection, and overhead structures should be designed carefully to not obstruct passive air flow and thereby inadvertently create an accumulation risk, such as a weather canopy. It is important to recognize that ventilation will not prevent flammable mixtures from forming during large leak or blow-down scenarios.

4. Detection of a hydrogen leak in the incipient stage of a release is critical for safety. This is accomplished through leaking checking during preventative maintenance, leak detectors, and hydrogen gas detectors. Leak detection methods inherent to the system may include pressure or flow rate monitoring. In fact, many hydrogen dispensers use pressure holds during fill operations to check for leaks by monitoring for pressure drops. Permanently installed (fixed) hydrogen gas detectors only detect hydrogen in a single point in three-dimensional space. For this reason, the functionality of fixed hydrogen detectors located outdoors may not be assured. The best practice for fueling stations is to install fixed detectors directly above likely leak locations, such as an H2 dispenser (required by NFPA 2) and gas management cabinets. Acoustic leak detectors may also be used. Portable hydrogen gas detectors can also be worn by personnel when approaching or working around the pressurized system. Since hydrogen flames are difficult to see, flame detectors are also recommended to monitor the hydrogen supply system and dispenser.

5. System controls are an important engineering tool to automatically fail safe if an anomaly is sensed or an emergency stop button is pressed. Hydrogen isolation of the storage system and delivery tubes is the primary method to safe the fueling system. Hydrogen fires will extinguish quickly if the flow of hydrogen is stopped. System controls may be responsible for automatically cutting power to all non-critical electrical components (e.g. compressors) and opening valving to safely vent trapped volumes in piping (as determined by process hazards analysis). Emergency stop buttons should be placed at several locations around the fueling system, including the delivery/offload and dispensing areas. Many systems are monitored remotely by the station operator.

7. Venting of hydrogen to a safe location for any designed operation assures any vented hydrogen does not endanger people or property. At fueling stations, vent stacks release hydrogen at higher elevations where hydrogen can rise and disperse. All volumes of hydrogen should be capable of being vented through a designated vent stack, even in the event of a failed closed component or blockage. Unless specifically engineered otherwise, low pressure gas should be vented separately from high-pressure gas.

Cold GH2 vapor (from an LH2 tank) must be vented at higher elevations than GH2. Liquid hydrogen vents are designed to prevent cryo-pumping and allow hydrogen to warm and release as a cold gas, not as a liquid. Fog is created by a hydrogen release or cold surfaces when water condenses from the surrounding air. Fog is inevitable, but associated risks are mitigated by releasing cold vapors high in the air and siting the system so any fog formed is not hazardous to the surrounding area.

8. Purging at the fueling station may be required if maintenance is needed on large volume components such as storage tanks. Due to the cryogenic temperature of LH2, only helium should be used as a purge gas for LH2 systems.

9. PPE such as fire-resistant clothing (FRC) should be required for personal safety in the event of a GH2 fire. Cryogenic clothing is used for any interaction with LH2 cold piping. Cold surfaces should never be touched without proper PPE. Face shields may also be required for specific operations such as offloading LH2.