Installations which use large amounts of hydrogen may be best supplied with cryogenic liquid hydrogen (LH2) as it is easier to transport and deliver than large volumes of compressed gas. Typical large-scale hydrogen supply systems will include a permanent installation including cryogenic storage, vaporization, and compression equipment owned and maintained by the hydrogen supplier. In some cases small amounts of LH2 may be needed for laboratory or experimental work. In such cases it is extremely important that anyone using LH2 is specifically trained to handle it safely.

Anyone working with hydrogen needs to understand the basic characteristics of hydrogen gas (see Hydrogen Properties and Leak Detection Considerations).

Liquid hydrogen leaks are easier to detect than leaks of compressed gas for the following reasons:

Controls and safety features include: 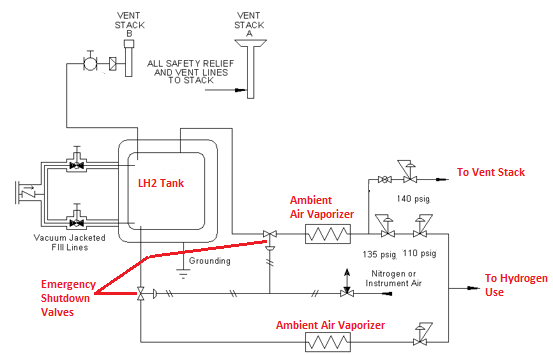 The large temperature difference between ambient and cryogenic conditions results in significant thermal contraction of most materials, which must be accommodated in designs for cryogenic service.