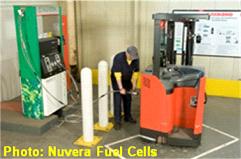 Outdoor hydrogen fueling stations started to appear in select U.S. markets in the 1990s to provide fuel for fleets of hydrogen-powered cars and buses involved in demonstration projects. Fueling expanded indoors to support similar demonstration projects as large-scale warehouse operations replacing battery-powered industrial trucks with hydrogen-powered ones. By 2020, there were more than 50,000 hydrogen powered industrial trucks in operation in the United States.

Indoor fueling in a typical warehouse is safe because of the large air volume as compared to other indoor spaces (e.g., a residential garage); potential hydrogen leaks can disperse rapidly in a large volume resulting in a hydrogen concentration below hazardous levels.

Hydrogen can be as safe as, or safer than other means of energy storage used in industrial trucks.

Best practices for setting up an indoor refueling station for hydrogen-powered industrial trucks can be found in fire codes referenced by the jurisdiction.

Addition information can be found in the following webpages: