Hydrogen Compared with Other Fuels

Like gasoline or natural gas, hydrogen is a fuel that must be handled properly. It can be used as safely as other common fuels when simple guidelines are followed.

Produced by the U.S. Department of Energy, the Hydrogen Data Book. provides useful data on hydrogen properties, including:

Bar charts presented in the following sections compare some key properties of hydrogen with those of several commonly used fuels - natural gas, propane, and gasoline vapor.

Hydrogen is colorless, odorless, tasteless, non-toxic, and non-poisonous. It’s also non-corrosive, but it can embrittle some metals. Hydrogen is the lightest and smallest element, and it is a gas under atmospheric conditions.

Natural gas and propane are also odorless, but industry adds a sulfur-containing odorant so people can detect them. Currently, odorants are not used with hydrogen because there are no known odorants light enough to "travel with" hydrogen at the same dispersion rate. Current odorants also contaminate fuel cells, which are an important application for hydrogen.

Hydrogen is a very small molecule with low viscosity, and therefore prone to leakage. In a confined space, leaking hydrogen can accumulate and reach a flammable concentration. Any gas other than oxygen is an asphyxiant in sufficient concentrations. In a closed environment, leaks of any size are a concern, since hydrogen is impossible for human senses to detect and can ignite over a wide range of concentrations in air, as discussed in the section below. Proper ventilation and the use of detection sensors can mitigate these hazards.

Hydrogen has a high energy content by weight, but not by volume, which is a particular challenge for storage. In order to store sufficient quantities of hydrogen gas, it's compressed and stored at high pressures. For safety, hydrogen tanks are equipped with pressure relief devices that will prevent the pressures in the tanks from becoming too high.

Hydrogen's flammability range (between 4% and 75% in air) is very wide compared to other fuels, as shown in Figure 3. Under the optimal combustion condition (a 29% hydrogen-to-air volume ratio), the energy required to initiate hydrogen combustion is much lower than that required for other common fuels (e.g., a small spark will ignite it), as shown in Figure 4. But at low concentrations of hydrogen in air, the energy required to initiate combustion is similar to that of other fuels. 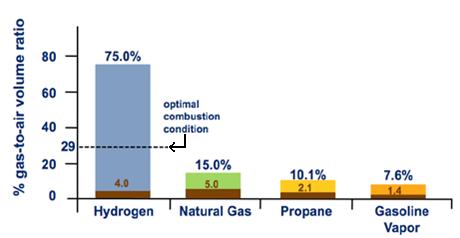 Hydrogen burns with a pale blue flame that is nearly invisible in daylight, so it is almost impossible to detect by the human senses (see Hydrogen Flame Characteristics video under Supporting Examples in the right column of this page). Impurities such as sodium from ocean air or other burning materials will introduce color to the hydrogen flame. Detection sensors are almost always installed with hydrogen systems to quickly identify any leak and minimize the potential for undetected flames. Compared to the propane flame (right) in Figure 5, the hydrogen flame (left) is almost invisible, but it can be seen with the thermal imaging camera shown in the foreground. At night, hydrogen flames are visible, as shown in Figure 6.

In addition, hydrogen flames radiate little infrared (IR) heat, but substantial ultraviolet (UV) radiation. This means that when someone is very close to a hydrogen flame, there is little sensation of heat, making inadvertent contact with the flame a significant concern. UV overexposure is also a concern, since it can result in sunburn-like effects.

If a large hydrogen cloud comes into contact with an ignition source, ignition will result in the flame flashing back to the source of the hydrogen. In open spaces with no confinement, flames will propagate through a flammable hydrogen-air cloud at several meters per second, and even more rapidly if the cloud is above ambient temperature. The result is a rapid release of heat, but little overpressure, and the combustion product is steam. It should be noted that hydrogen combustion is more rapid than combustion of other fuels. A hydrogen cloud will burn within seconds, and all of the energy of the cloud will be released.

However, if hydrogen gas mixtures enter confined regions, ignition is very likely and can result in flame acceleration and generation of high pressures capable of exploding buildings and throwing shrapnel. Flammable mixtures of hydrogen in confinements such as pipes or ducts, if ignited, will readily result in accelerated flames and conditions that can lead to transition to detonation. Detonation does not occur in unconfined hydrogen-air mixtures without strong shockwaves (i.e., explosives).

A leak in a pressurized (>200 psia) hydrogen storage system will result in a jet that may extend for some meters. If ignited, the jet flame can cause serious damage to anything it encounters.

Liquid hydrogen has different characteristics and different potential hazards than gaseous hydrogen, so different control measures are used to ensure safety. As a liquid, hydrogen is stored at -423°F, a temperature that can cause cryogenic burns or lung damage. Detection sensors and personal protective equipment are critical when dealing with a potential liquid hydrogen leak or spill.

The volume ratio of liquid to gas is approximately 1:850. So, if you picture a gallon of liquid hydrogen, that same amount of hydrogen, existing as a gas, would, theoretically, occupy about 850 gallon containers (without compression). Hydrogen undergoes a rapid phase change from liquid to gas, so ventilation and pressure relief devices are built into hydrogen systems to ensure safety.

Liquid hydrogen is also colorless. It is extremely cold and only persists if maintained in a cryogenic storage vessel. Storage is usually under pressures up to 150 psi. If spilled on ambient-temperature surfaces, liquid hydrogen will rapidly boil and its vapors will expand rapidly, increasing 848 times in volume as it warms to room temperatures. If the liquid hydrogen is confined (such as between valves closing off a length of pipe) and left to warm without pressure relief, pressures approaching 25,000 psia are possible. With the exception of specially designed enclosures, there is a high potential for exposed confinements to rupture under such pressures, producing high-pressure jets of gas and high-speed shrapnel. Ignition is extremely likely under such circumstances. If large quantities of hydrogen displace the oxygen in the air, hydrogen will act as an asphyxiant.

G-095A-2017: ANSI/AIAA Guide to Safety of Hydrogen and Hydrogen Systems, can be purchased from arc.aiaa.org.