Industry has safely used hydrogen for decades in the following applications: 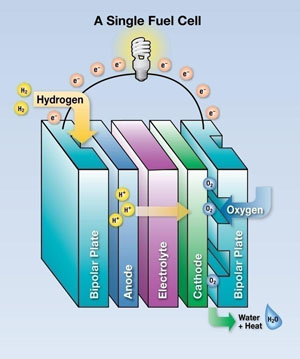 New markets are emerging for industrial trucks (e.g., forklifts) and passenger cars powered by hydrogen fuel cells. Indoor and outdoor hydrogen fueling stations are being built in support of these vehicles. A fuel cell is a device that combines hydrogen with oxygen from the air in an electrochemical reaction to create electricity, which can power an electric motor and propel a vehicle. Fuel cells are twice as energy-efficient as combustion engines, and the hydrogen used to power them can come from a variety of sources, including renewable energy resources. A hydrogen fuel cell emits only heat and water, without producing any air pollutants or greenhouse gases.

Private companies and government agencies (e.g., Department of Defense) with large warehouses/distribution centers are starting to adopt fuel cells to power their materials-handling equipment. Some of the companies that are deploying fuel cell industrial trucks are Walmart, Whole Foods, Bridgestone Firestone, Coca Cola, Central Grocers, Nestle Water, Fed Ex, and Genco. The hydrogen gas is stored outside and the dispensers for refueling the industrial trucks are located indoors.

Nine of the major auto manufacturers are developing fuel cell vehicles (FCVs) powered by gaseous hydrogen. There are approximately 300 FCVs on the road today, mostly in California, Michigan, Florida, and New York. There are about 60 outdoor hydrogen fueling stations in the U.S., with the majority of them located in Southern California. Some of the FCVs currently on the road are shown in the photos below.