Only properly trained and equipped firefighters should attempt to fight or manage a hydrogen fire.

Normally hydrogen fires are not extinguished until the supply of hydrogen has been shut off or exhausted since there is a danger of re-ignition and explosion. Personnel who work around hydrogen should be trained in the characteristics of hydrogen fires and proper procedures for dealing with them.

In general, personnel should be trained to evacuate and assist other persons and call first responders (see Incident Management System) but not to actually attempt to fight a fire.

Since hydrogen has a very wide flammability range and low ignition energy, it should be assumed that any hydrogen leak or release is likely to result in hydrogen fire.

Since hydrogen is colorless, odorless, burns with a nearly invisible flame (especially during daylight hours), and gives off relatively little radiant heat, a hydrogen fire is often difficult to detect. Thermal imaging cameras and flame detectors should be used to verify that a hydrogen flame is present. If these tools are not available, personnel should cautiously approach a suspected leak and watch for thermal waves that signal the presence of a flame and put combustible objects (e.g. a broom) or dust particles into the suspected flame to detect its presence.

Although hydrogen fires do not produce smoke themselves, burning of nearby combustible materials can result in smoke. Thus, personnel should be aware that smoke inhalation can be a danger in a hydrogen fire.

Hydrogen fires can damage or ignite objects in the vicinity through heat transmitted by radiation and convection. 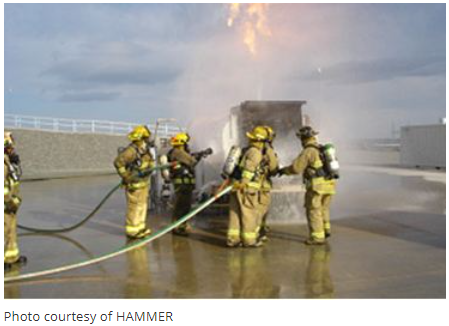 Safe limits for thermal radiation exposure for personnel and equipment cover a wide range and are listed in the appendix of NASA STD 8719.16 (pdf, 3mb)

G-095A-2017, ANSI/AIAA Guide to Safety of Hydrogen and Hydrogen Systems, can be purchased from www.aiaa.org.